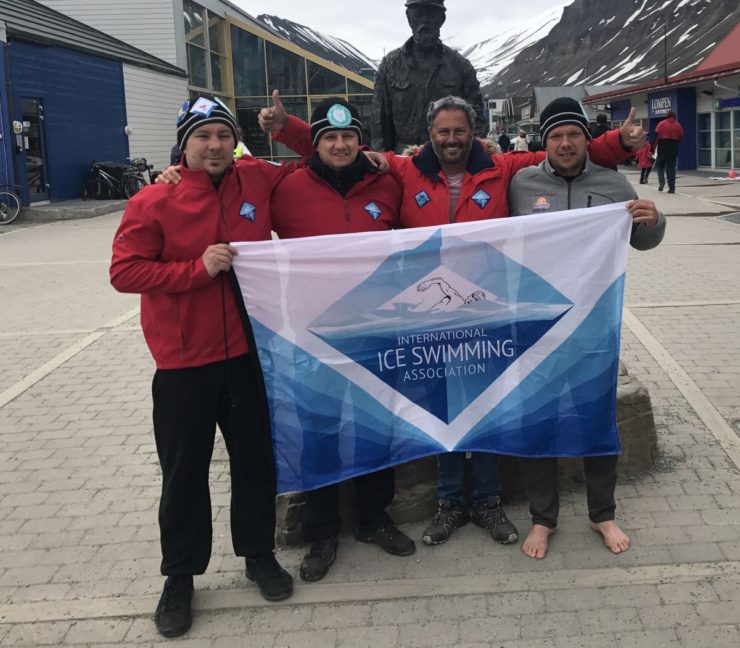 A group of Polish ice swimmer, from Katowice, lead by Leszek Naziemiec Poland IISA President have accomplished an amazing feat of swimming the north most Ice Mile in Svalbard, Arctic Norway at 78.3 North, just shy of the North Pole.

The expedition, originated by the polish team joined a little red arctic yacht to venture into glacial fjord in the waters of Svalbard, by Spitsbergen Island. The team of four swimmers including IISA founder and Chair Ram Barkai swam 1 Ice Mile.

The yacht was Captained by a seasoned Arctic sailor Jerzy Rozanski and overseen by an experienced expedition Dr. Michał Starosolski.

Well done to all

Keep it SAFE and See you in the ICE

This website uses cookies to improve your experience while you navigate through the website. Out of these, the cookies that are categorized as necessary are stored on your browser as they are essential for the working of basic functionalities of the website. We also use third-party cookies that help us analyze and understand how you use this website. These cookies will be stored in your browser only with your consent. You also have the option to opt-out of these cookies. But opting out of some of these cookies may affect your browsing experience.
Necessary Always Enabled
Necessary cookies are absolutely essential for the website to function properly. These cookies ensure basic functionalities and security features of the website, anonymously.
Functional
Functional cookies help to perform certain functionalities like sharing the content of the website on social media platforms, collect feedbacks, and other third-party features.
Performance
Performance cookies are used to understand and analyze the key performance indexes of the website which helps in delivering a better user experience for the visitors.
Analytics
Analytical cookies are used to understand how visitors interact with the website. These cookies help provide information on metrics the number of visitors, bounce rate, traffic source, etc.
Advertisement
Advertisement cookies are used to provide visitors with relevant ads and marketing campaigns. These cookies track visitors across websites and collect information to provide customized ads.
Others
Other uncategorized cookies are those that are being analyzed and have not been classified into a category as yet.
SAVE & ACCEPT